I was happy and relieved to meet her; it was about an hour before the event and I still hadn’t met the translator.

When you do my job internationally you know that the interpreter can make or break your presentation. So I was hoping she’d get her skates on so we could have a pre-match briefing.

A few moments later Maria hit me with the best news ever. I’ll share that with you in a moment, but first you need to know exactly what Maria Santa does.

The first thing to note is that Maria is a SIMULTANEOUS translator.

That means she’s listening to me, translating what I’m saying and repeating it in Portuguese in real-time. It’s like rubbing your tummy and patting your head on steroids.

At most points she was only around 3-4 seconds behind me. I know that because when I’d made one of my hilarious* observations, the English speaking/understanding crowd would laugh and the Portuguese speaking/listening group would laugh 3-4 seconds later.

From the stage I could see Maria, locked in her soundproof glass booth. I’ve worked with translators in the past, several who have had their heads down, intensely focused on the job in hand, just doing their best to get through their hour.

Not Maria Santa . She was gesturing, smiling and, as far as I could see, having a great time! And afterwards the delegates with the headphones commented on how wonderful the translator was – a welcome first.

But I knew Maria Santa would be brilliant. I knew after talking with her for just 5 minutes.

I knew she’d be great because she’d already done the work.

Maria had spent many hours during the days before the event watching videos of me presenting, reading articles on-line and immersing herself in the world of How to Be Brilliant – or should I say Cómo ser Brillante!

A brilliant performance is usually the tip of the iceberg.

A brilliant sale happens because of hours, days, weeks and even years of doing the preparation.

A brilliant meeting involves people coming to the table who know their subject and appreciate the agenda.

You get the idea.

What’s your prep? What’s the work?

And here she is… 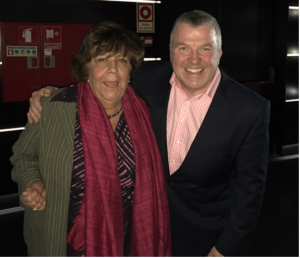